Gender Studies CSS Syllabus 2022 – Gender Studies is an optional course in CSS from Group V and attracted the attention of students following changes to the CSS syllabus in 2016. CSS syllabus in the year 2016. Are you concerned about not receiving high marks on your CSS gender studies exam? Gender Studies is high scoring subject when compared with other subjects that are in group V. Be assured that you can get top marks on the CSS gender studies exam by following our study guide, and reading all the FPSC’s recommended study material for students on our page.

Gender Studies contain the following syllabus for CSS Examination and this syllabus is released by FPSC. The gender studies paper is 100 marks to the CSS candidate’s total marks. It is possible to write you Gender Study paper easily by following the syllabus below and this is a highly scoring area for Group Five. The gender studies paper is comprised of parts A and B, each with 50 marks.

Previous papers from CSS 2020 Gender Studies can aid in getting a better understanding of the syllabus of GS.It is easy to pass you CSS gender studies test by focusing on its primary syllabus, which includes a range of subjects like Feminist Theories and Practice, Gender and Development, Status of Women in Pakistan Gender-based violence the introduction of Gender studies, Feminist Movements, Gender and Governance and cases studies.

Capitalist and colonial views of gender the analysis of gender in development theory, Modernization theory, World System Theory, Dependency Theory, Structural Functionalism, How Gender approaches developing, Women in Development (WID), Women and Development (WAD) , Gender and Development (GAD), Gender criticism of structural adjustment Policies (SAPs) and globalization, and Gender. Students who are working on their forthcoming CSS gender studies paper will be sure to score top marks as this is a very sought-after essay that will help you score the highest marks for your CSS final exam.

If we study the mentioned syllabus of Gender studies, we’ll find certain topics that are simple and require very little preparation. However, it should be kept in mind the fact that Current Affairs regarding this subject can play a significant part in achieving a high grade in this field. Gender Studies Syllabus Contents are; Introduction to Gender Studies, Social Construction of Gender, Feminist Theories and Practice, Feminist Movements, Gender and Development, Status of Women in Pakistan Gender and Governance and Studies on Case Studies, and so on. 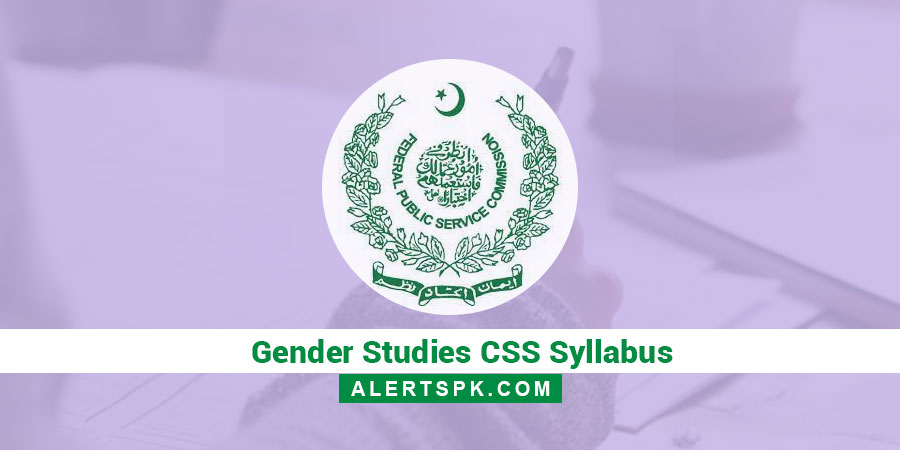 Though theories can be difficult, a well-planned and a regular schedule for preparation will over come these obstacles. Gender Studies CSS Syllabus 2021 is an optional topic in CSS in Group V and was the subject that caught the attention of aspirants following an overhaul of the CSS syllabus in 2016.

Make sure to study the previous papers from CSS 2020 which will bring an accurate picture of the subject Gender Studies. Gender Studies contain following syllabus for CSS Examination and this syllabus was announced by FPSC.