Defense Security Force DSF Pak Army Jobs 2022 The online registration process has begun today. Candidates having at least middle/Matric/Intermediate education are eligible to apply for these Jobs in Pakistan. Job opportunities to fill Sipahi (General duty) and Clerks are announced through the Defense Security Force (DSF) across Pakistan by 2022. The official advertisement can be viewed here. The following positions are available to Pakistani citizens. There are several districts in Pakistan which include Gilgit Baltistan and Azad Kashmir will be subject to regulation. Advertisements for the posts are below, as are the required qualifications, experience, and requirements for residence are provided.

The Pakistani Army Defense Security Force is in need of members to fill vacant positions on general duty as well as at the Office. The candidates will be selected by district size that are in each province. Candidates who are interested to be enrolled by DSF should visit the recruitment Centers of DFS in accordance with the timetable. Pak Army DSF Jobs 2022 announced by Defence Security Force across all across Pakistan for posts such as Sipahi (General Duty) and Clerks.

Districts with vacant positions have been filled through departmental teams that visit the regions. The following districts of Punjab, Sindh, Khyber Pakhtunkhwa, Balochistan, Azad Kashmir, and Gilgit-Baltistan require registration for military services between 8:45 a.m. and between 8:00 a.m. and 4:45 p.m. For more information and a schedule, refer to the following table. Pak Army Defence Security Force DSF Jobs 2022 application form. In this latest Recruitment, Pak Army Jobs the eligible male and female applicants are invited to apply. 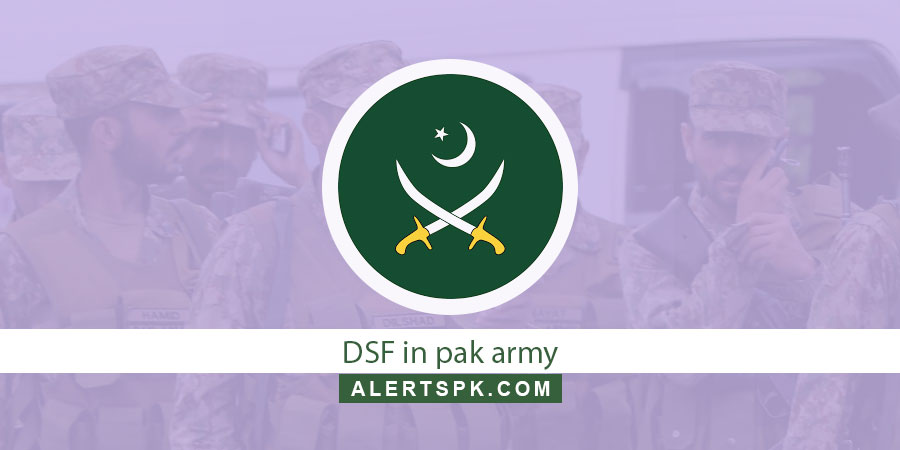 A Class One Officer’s endorsement on your National Identity Card or Form B along with two passport-sized photos are required, as well as two envelopes for mail with your full address. The following districts provide many opportunities to visit. Candidates should provide an employer with their valid cell phone to apply for the job.

If the candidate’s credentials are found to be fraudulent Legal action is brought against them. The DSF will not accept any illegal payment to recruit new members. Legal enforcement will be initiated against any person or entity which is not authorized to accept or give money. In Pakistan, the government Pakistan has set up a quota for the hiring of employees. After receiving a complete invitation letter from Medical DSF Centers, the selected candidates can be sent on to their designated CMH.

You’ll become an army soldier once you have completed your training. As such, you must visit this website frequently for updates regarding what’s on the Pakistan Army Defense Security forces merit list, medical tests and interview schedule, the final list of candidates and Cetera. Only Pakistan citizens can be considered to be considered for Pakistan Army Defence Security Force jobs 2022. Between 18 and 25 years is a an age limit to join Pakistan Army.